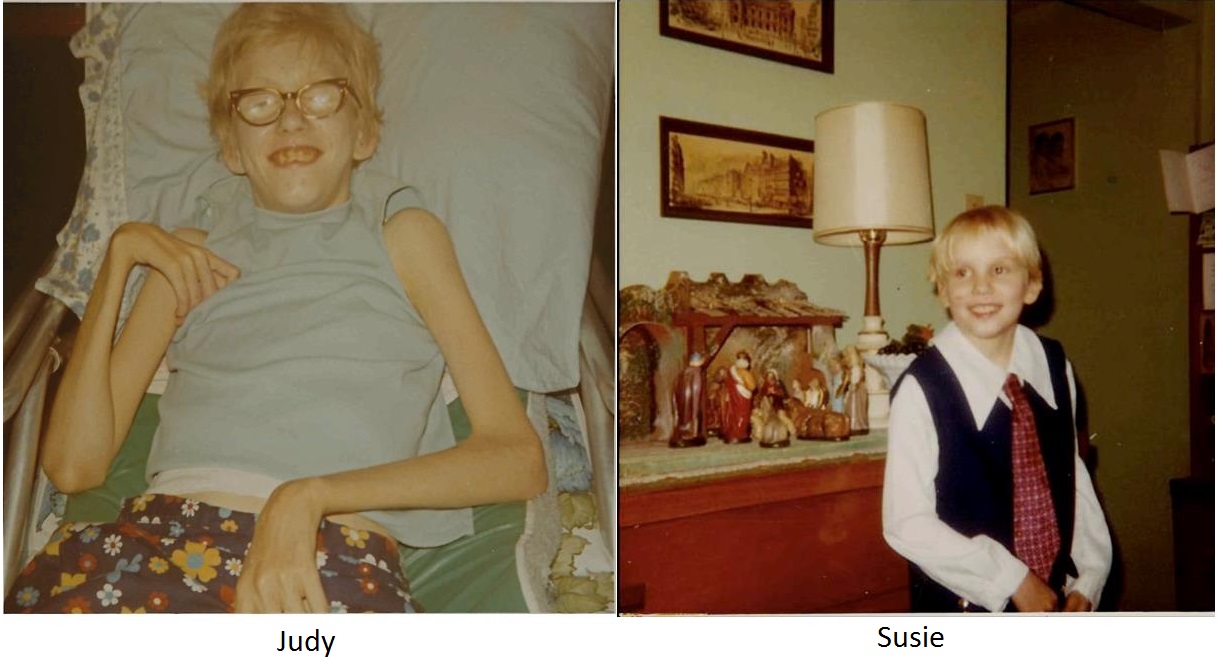 Judy and Susie Hempling were sisters, four years apart in age, growing up in a large family in Buffalo, NY in the early 1960s.   Judy was a very active and pleasant child, but started to have vision issues around age 5, and was also showing signs of a learning disability.  Her parents, Ed and Peg Hempling, took her to an ophthalmologist.  He told them she needed surgery as she had displaced lenses, but he also recommended they bring her to Children’s Hospital in Buffalo, as he had recently become aware of a rare genetic disease that often first showed symptoms of near sightedness and displaced lenses.  (This was in 1964, just one year after Harvey Mudd from the National Institute of Health discovered homocystinuria.).

Judy was tested and diagnosed with homocystinuria (HCU).  Her parents, Ed and Peg Hempling, were devastated by the news. They then brought their other children to be tested and received the tragic news that their lovable 2-year-old daughter, Susie, had the disease as well.  Judy and Susie didn’t seem very sick at the time but they progressively worsened. Pyridoxine (Vitamin B6) was tried but they were not responsive. There was little knowledge back then about protein restricted diets.   Their father was especially frustrated because although he was a pharmacist, there were no medications available for their illness.

Both Judy and Susie were considered “mentally retarded” based on their learning disabilities, and attended special education schools.  Both suffered over the next several years from blood clots, seizures, displaced lenses, osteoporosis, cognitive deficit, and other issues.   Judy had surgery for her displaced lenses and had a stroke during the surgery.  They both were hospitalized several times, and while at home often slept in their parents’ room as they needed 24 hour care.

Although doctors recommended that moving them to an institution might be the best way to care for Judy and Susie, their parents refused to do so, instead providing them with an abundance of love and the best care and support possible. Even as their disease progressed, Judy and Susie enjoyed life with their parents and five other siblings when they were not acutely ill, including Sunday picnics at the county park, trips to amusement parks, and summer camp at Cradle Beach just outside of Buffalo.  They lived for 7 years after their diagnoses, and died within 6 months of each other.  Susie died in January 1972 at age 9 from a blood clot in her lungs and Judy died in July 1972 from a stroke. Their story inspired their sister Margie, who was in-between them in age, to do everything she could to help those facing this disease, which led her to form the Hempling Fund for Homocystinuria Research  and to work with Danae Bartke to establish HCU Network America.

Donate in honor of Judy and Susie