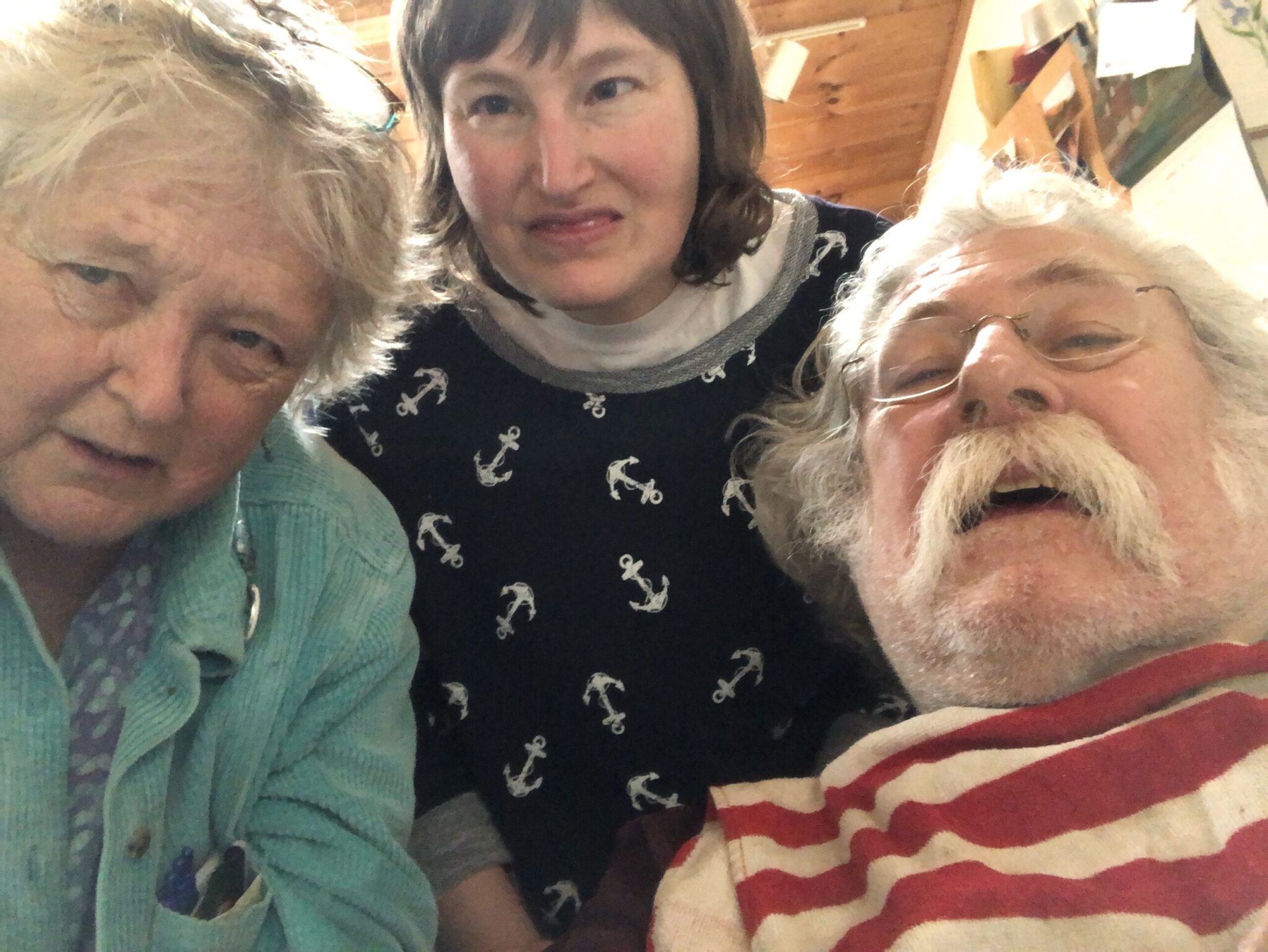 How was your child diagnosed?
It was during winter and spring 1984-1985. After a harrowing four months of denial by the local MD (who'd delivered Anna) that anything was abnormal about her listlessness, failure to respond to feeding attempts, and blue pallor, even his suggestion that Paul, and especially I, were suffering from Munchausen-by-proxy syndrome since I was a "distraught late prime-imp" who asked whether my newborn baby might be having seizures, we had tests run at the larger regional medical center where MDs were equally flummoxed. "Go home and wait," they said. So we asked a medical friend to help with ideas, and she had us order the same tests run on our daughter at the smaller hospital where she had been born. The technologists and nurses there said, "We don't know what's wrong, but there definitely is a serious problem; these parents are upset for valid reasons."

We went back to the bigger hospital for more tests, but this time with respected local medical opinion behind us; our daughter, now almost 5 months old, was then readied for Boston Children's Medical Center. No ambulance was available for the transport to Boston, so we drove her there ourselves. Very soon after our arrival we were picked up by a promising young resident, Dr. Holmes Morton, whose research into inborn errors of metabolism (IEM) led him to compare Anna's situation with babies he'd read about--a boy in Canada and another in Australia who presented in similar ways. He called in a senior associate, a world-renowned physician named Harvey Levy, who'd written seminal pieces about IEM. This doctor was gentle and supportive, not accusatory and judgmental. He sat with us in our initial interview and hand-wrote 14 pages of notes from our observations of Anna's failure to thrive, seizure-like behaviors, and general disinterest in anything around her.

The young resident and the world-class MD conferred with other physicians and, after new and different tests were run and a megaloblastic anemia was found (a lethal development), agreed that Anna was suffering from an IEM, probably in the family of vitamin B12 (cobalamin) disorders. This had been the young resident's conjecture, even before those tests were run. Anna was studied in-hospital, given injections of hydroxocobalamin that made her scream, and given more tests. My sad little pincushion baby! A very short time later, Dr. Levy noticed Anna's slightly improved blood values and said, "I think we can do better for Anna." He switched the hydroxyCbl for injections of methylcobalamin (MeCbl), explaining that it is more bioavailable than the "hydroxy," as it's reduced by one step, a simpler substance, and easier for a baby's body to use.

We asked many questions and Dr. Levy kept up. He realized that teaching us about our daughter's problem was better than having us sit and stew in a waiting room. We were sent home with Anna, but with things to do. When we asked for reading ,Dr. Levy gave us assignments. When it was clear that Anna's metabolic protocol needed to be supplemented with other substances that are hard to find in the US, he let us feel like research partners by having us hunt for these metabolites in a variety of different states and European countries. Some of them, we found and obtained. And Dr. Levy had contacts in Japan, where the best MeCbl then available in the world could be obtained; he and his Japanese contact arranged for a steady supply for Anna. (It later became more widely available, and much more affordable, in this country.)

A few weeks into Anna's treatment, the seizures I had seen after her birth returned, and even more intensely. We went back to Boston Children's Hospital for more tests, resulting in a diagnosis of infantile spasms with hypsarrhythmia, a severe and damaging seizure disorder. Through the summer 1985, we tried a conventional anti-seizure medication, supervised by phone discussions by Dr. Holmes Morton. By September, when that strategy produced no results, Paul brought Anna back to Boston Children's for the start of ACTH treatment and coaching for home administration. During that time, Paul met another physician, a pediatric neurologist with a developmental background who later became our local metabolic advisor--James Filiano, MD. The ACTH wasn't a total cure but did stop the deathly hypsarrhythmia. After that, Anna began to grow. She gained weight and strength, color in her cheeks, and at least passing interest in things and people around her.

When Anna was eighteen months, we asked Dr. Levy to arrange an MRI for her; the results were disturbing. Her brain lesions were many, and her optic nerve had only a trace of the myelin sheath normal for that age. But Dr. Levy assured us that if we held to Anna's medical regimen with care and precision, we would see improvements. The second MRI at 36 months was dramatically improved. Anna was clearly able to see to some degree, and her coordination had been improved by the treatments. The MRIs were taken and became part of the diagnostic data used by a former student and then colleague of Harvey Levy's in Montreal, the scholarly David Rosenblatt, himself a Cobalamin researcher and diagnostician. At this time, Dr. Rosenblatt completed his differential diagnostic study of Anna's cultured fibroblasts, in his labs at McGill, determining her problem to be Cobalamin G disorder.

How has the diagnosis affected you, your family and relationships?
It totally changed the dynamic of our lives. Instead of becoming a nice, upwardly mobile family with a lively social calendar full of playdates, PTA fundraisers, and vacation parties, we circled our wagons around our daughter, concentrating on her development through steady refinements of her medical protocol and her work with the best therapists available for all areas in which she was affected: physical, occupational, sensory, visual, speech, and musical. Some strategies worked; many did not.

Then came her education, starting with day care and nursery school, followed by Waldorf and recreational camp, then special education locally. We did not want to have her schooled in a distant location where we couldn't monitor her learning and support the process and the practitioners. Her public elementary education was a huge challenge to the local teachers, who did the best they could, Anna's disabilities being significant--no speech, uncoordinated gait, minimal fine motor control, visual problems, and more. Her secondary-level learning at the independent Academy in our town was more successful. She had dedicated teachers with some background in developmental disabilities and autism, along with more inclusive school practices.

We provided Anna with developmentally appropriate summer programs for years until school funding started for such things. Fortunately, our state's agencies have been increasingly supportive. But for a long time--and now in the pandemic, it's pretty much mostly us. Anna is back home with the old folks. And now in the Age of COVID-19, who really has the sort of social life they want? Along this journey, our lives have been enriched by the great number of phenomenal people who have helped us and Anna.

What are some of your successes with the disorder?
Success won't be attained until we've cured her and helped her overcome the neurologic challenges she deals with daily. We continue to work with Anna through medical nutrition and physical and communication development. It's slow going, but we have a wonderful team.

What are some of the challenges you have faced?
Finding and affording meds and medical nutrients; learning to read and understand medical and developmental literature; finding effective therapists for our daughter; finding programs to stimulate, teach, and involve our daughter in learning how to move, behave, interact with others and with animals, and manipulate materials; teaching her and helping others to teach her skills at home and in the community, working with teams of doctors and educators to maximize Anna's development. She has needed special strategies to help her overcome muscle contractures that started in her earliest days.

Well into Anna's adulthood, at the recommendation years before by Dr. Harvey Levy, we ordered an MRI for Anna to determine the reason for her unsteady gait; a congenital tethered cord was discovered. Though the "fix" for this problem is of questionable effectiveness, the tethered cord explains her deeper problems and we are accommodating that reality. Along the way and later, including now, maintaining our extended family connections and friendships with a minimum of travel and expense. Taking vacations that typical middle-income Americans would expect to enjoy has been extremely difficult, so these days we don't even try. We live in a vacation area, which is good enough for us.

What words of advice would you give to newly diagnosed families?
Decide at the outset whether or not your love for your partner and your child can be respected before anything else. If it is a powerful enough factor in your life, it can get you through almost anything. In the darkest, pre-diagnosis days of our parenthood, Paul and I shared a motto: "NO MATTER WHAT..." The rest of that statement could be "I love you" or 'we love our baby" or "we will work for as long as we last to help our family grow," etc. It became a quick way to affirm our dedication to helping Anna, and of our mutual love.

Despite all of these challenges, Anna has grown up as a person who has unexpected strengths. She is learning to type on electronic keyboards and has shown herself to be cognizant of the world around her, observant of people's needs and motivations, and capable of wit, metaphor, irony, and sarcasm. She can be funny as the dickens. And she is kind-hearted. We are proud of our daughter. That's her success, though I suppose we can say we share it.