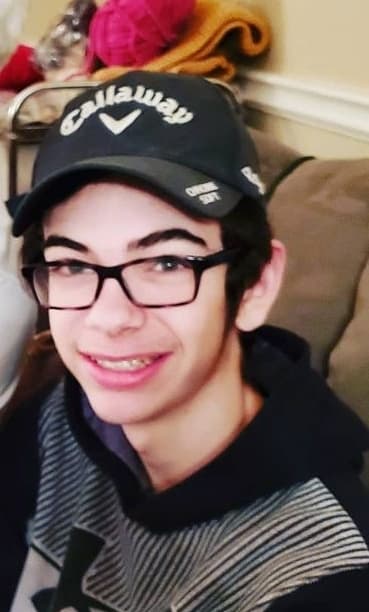 Nathan, was born with HCU, but was not diagnosed with the disorder at birth. Fortunately, he is B-6 responsive - meaning his levels can be controlled with high doses of B vitamins, but it wasn't until he started developing eye problems that he was tested for the disorder, and began treatment.

Nathan was diagnosed with Homocystinuria when he was almost 7 years old. Unfortunately, Ontario didn't start newborn screening until 2006 and Nathan was born in 2005. A routine eye exam was held at his school and a note was sent home to say that we should have his eyes checked. We took him to see an optometrist and as soon as she looked into his eyes, she quickly referred him to see an Ophthalmologist. I noticed for quite some time that Nathan’s iris's “jiggled” or “rippled” when he moved them and I knew it wasn’t normal, so I mentioned that to the ophthalmologist. She did some tests and told us that both his lenses have dislocated and wanted us to see a cardiologist and geneticist. She said Nathan may have Marfan’s Syndrome or another connective tissue disorder.

His father and I were in shock and very concerned because we were told this would affect his entire body and could potentially shorten his life. He had an echocardiogram as they thought he had a murmur, but it thankfully came back normal. From there he had genetic testing at Sick Kids hospital in Toronto. It was a long 3 month wait for the results to come back. In March of 2012 we got the diagnosis. Nathan has Classical Homocystinuria. His father and I were terrified; we read so much about HCU and saw some very grim statistics. We had no idea what this disease was going to do to our son, especially since he was diagnosed so late. The doctors told us that this was a very rare and serious disorder and said Nathan could have a heart attack, stroke or seizures and that he is also very prone to blood clots.

His blood and urine were tested and his homocysteine levels came back at 300 (normal is 4-14) and his methionine levels were over 400. His doctor immediately had him start taking high doses of vitamin B6 and then eventually vitamin B12, folic acid and Betaine. Luckily Nathan is responsive to these meds, so he doesn’t need to follow a metabolic diet, but he will always have to limit his protein intake as his body is missing the enzyme to break it down properly. Looking back from when Nathan was a year old, his father and I knew something wasn’t right with our son. When Nathan was 6 months old, my sister and I witnessed him having a small seizure. It was about 5-10 seconds in length but it was enough for me to take him to the emergency room. Waiting for 3 hours with a crying baby then being told by the doctor that it was nothing, was completely infuriating; I knew something was wrong! 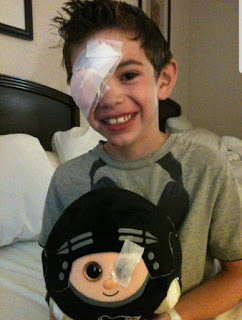 As time went on, Nathan was behind with walking and learning and had many sensory issues. We took him to his pediatrician, begging him to help us figure out what was wrong with Nathan. We had him tested for many things but all came back negative. He saw a speech-language therapist to help him with his comprehension. He also saw an occupational therapist for his fine motor skills. He had an x-ray for knocked knees and saw a specialist because he had problems with drooling when he was 4. All of these things were because of Homocystinuria! If we only knew then what we know now, he wouldn’t have had any of these problems!

We were told by Nathan’s ophthalmologist that he wouldn’t have to have surgery until he was into his teen years, but his vision continuously declined, and his lenses were almost completely detached. We had to wait 3 months for the Ontario Government to approve the lenses that his doctor wanted to use. Finally, in June 2013, he had a 3-hour surgery on one eye and again in July on his other eye. Before his surgery, his vision was 20/80 in 1 eye and 20/120 in the other eye. Today they are both 20/40 and he wears progressive glasses as his eyes can no longer naturally focus.

Since his diagnosis we had a few trips to the ER for chest pain and shortness of breath, all tests thankfully came back ok! An EEG was done when he was 9 because he had a lot of myoclonic jerking at night. The neurologist that read the EEG diagnosed him with epilepsy as he had epileptiform activity and was going to start him on anti-seizure medications. I asked for a second opinion so he had two 24hr EEGs done at Sick Kids hospital over the next 2 years, both with abnormal waves but not epileptiform so we were told just to watch for any signs but he may never have a seizure!

Nathan has improved immensely with his sensory issues and learning, not to mention his overall health. We see amazing changes with our son. Nathan is now 15 years old and very tall; he’s 6’2”. He loves playing hockey and downhill skiing and will continue having blood tests, eye exams, MRI’s, echocardiograms and other routine tests throughout his life. Fortunately, we know with the help of his doctors, Nathan will enjoy a long happy life! 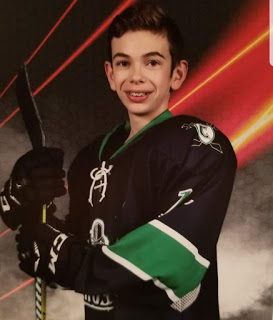