Hallie from the UK

Hallie was diagnosed at age 6 after 2 years of investigations following a rapid decline in her sight. It was discovered that she had dislocated lenses and had 2 lensectomy operations. We were under the impression that she had Marfan syndrome which has similar physical characteristics to HCU and samples were sent off for genetic testing which would apparently take months. Just days later we got the call that Hallie had Homocystinuria. That phone call and subsequent first meeting was beyond overwhelming. We’re getting told our daughter, who was an amazing eater, all of a sudden will be going on a stricter than vegan diet, will be on medication for life, will need to undergo regular tests and is at risk of blood clots and strokes. In hindsight, the blind panic is unnecessary. You will adapt and so will your child. It’s alot to digest but you will work it out. 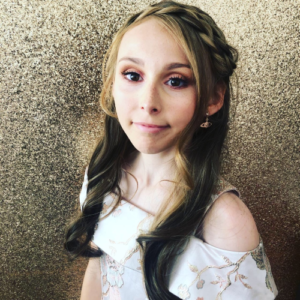 Our biggest HCU success is down to our little hero herself. From that first sip of her amino acid drink she gave us a big
thumbs up and carried on. We had been prepared for this to be a daunting task after hearing they’re so unpalatable and they don’t go down too well. From that moment on, she’s taken everything in her stride and adjusted accordingly. No it isn’t fair; yes it’s heartbreaking denying her something such as food, but she is an amazing, resilient girl and makes all our worrying seem ridiculous. My advice to families facing a new diagnosis is positive breeds positive. Make sure you have weighing scales, a note book and bear in mind that this will soon become second nature to you. 5 years on and I could probably tell you the protein allowance on half of the supermarket shelves. You can do this!