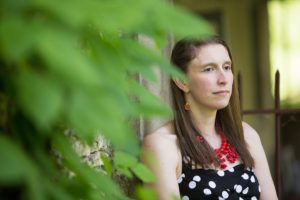 My name is Danae' Bartke and I was diagnosed with Homocystinuria in 1995 at the age of 10. We discovered the diagnoses because my younger brother had bumped his head on a table in school and then complained that he could not see. After a week or so, my mom took him into an eye doctor who referred us to the Wheaton Eye Clinic. At the Wheaton Eye Clinic they discovered that his lenses had detached from his retina and popped through his pupil. He then had immediate eye surgery to remove the lenses in both of his eyes. The doctor, at the time, told us that it could only be one of two conditions that had caused the detachment. Garrett was disqualified from one because he was not old enough, so it left us with only one possibility: Homocystinuria. The eye doctor at the Wheaton Eye Clinic then got in touch with Dr. Paul Wong and told him of the case. Immediately, Garrett was tested and it came back positive. The next step was to myself and my six siblings tested. Out of rest of us, I was the only one who also tested back positive for Homocystinuria.

After the diagnoses Dr. Wong took us through a couple of treatments to see which ones we had responded too. The first one was just a regiment of B6. From that, we discovered we did not have the kind of Homocystinuria that was responsive to B6. He then started us on B6, B12, baby aspirin, folic acid, Hominex-2 and a low protein diet. After that we were on track; at least for a bit. I can’t say that I was a very sweet child. My brother and I gave my mother a very difficult time. We hated the food, hated our Hominex, and we did not really follow the diet like we were supposed to. Our father had died a year prior to our diagnoses, so our mom did not have the time or energy to battle us every step of the way. Eventually, I did adhere to taking the Hominex and attempted to follow the diet. I wasn’t the best patient, but I did make an attempt.

In 2009, I had a really big fork thrown in my road. As a result of not following the diet as well as I should've, I developed a blood clot in my wrist. Dr. Wong advised me to go immediately into the Emergency Room at Rush and he would have someone there to meet me. After a week in the hospital I was released with a new lease on life. I realized how lucky I was and that if I was going to have a healthy, productive and long life, that I was going to have to take my diet seriously.

About two weeks after being released from the hospital I received a letter from the PKU Organization of Illinois inviting me to a low protein cooking class. I had neither heard of the PKU Organization of Illinois nor did I know there were any other disorders out there that had to follow a low protein diet. I was so excited! After the cooking class, we then went to the Annual meeting where we met Malathy from Taste Connections. From her, we found out about the first national conference for Homocystinuria. We went to that in March 2011. In the course of a couple of years we went from having no community to a community that was just so helpful and kind.

Donate in honor of Danae'