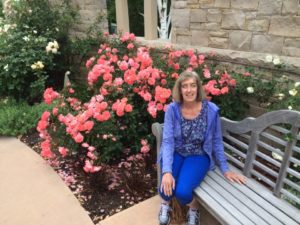 I am Pam and I was diagnosed with Classic Homocystinuria in April of 2011 at the age of 54. Growing up, I had always thought I had Marfan Syndrome, a connective tissue disorder. This was because at the age of two, my parents were told I had dislocated lenses in my eyes. This was something that doesn't show up in many conditions, and at that time, no one knew about Homocystinuria.

When I was 46, I suffered a stroke. Luckily, it was very mild, but obviously very scary. I often questioned why this happened to me since I had been following a healthy lifestyle for quite sometime. After that I resigned from my teaching job, and made an appointment at Stanford Hospital's Marfan's clinic. Although I didn't totally fit the criteria, they too thought I probably had Marfan's.

A few years later, I was hospitalized with blood clots in my lungs. I was put on Coumadin for six months. Two weeks after stopping the Coumadin, I again was hospitalized with more blood clots in my lungs. An ultrasound also revealed many blood clots in the deep veins of my legs. After I was released from the hospital, I started doing some investigating online. I started looking at the Marfan's website which I had looked at several times before. This time under the relateddisorder section, I saw something new. Homocystinuria was listed there. As I started reading about how it can cause strokes and blood clots, I became very interested. I called Stanford again and told them what I had read. They told me what blood work to have done, and to report back to them with the results. As soon as I reported my numbers to them, they immediately scheduled an appointment for me to be seen by one of their geneticists. This time I had genetic testing done which confirmed my diagnosis.

As others have said, I was put on high doses of B vitamins but I was found to be non responsive to that therapy. I then began taking Betaine and a special metabolic formula which supplies all the amino acids my body needs, except the one I can't process. I also began a very strict low protein diet. That has probably been the toughest part for me. I grew up eating anything and everything I wanted. My Mom was a gourmet cook, and I was used to going out to nice restaurants and eating whatever I chose. As hard as it is, I know it is something I will have to do for the rest of my life. I have already experienced some of the more scary aspects of this condition, but somehow I have been given a second chance and want to do everything I can to stay healthy. I have done very well on the diet and my numbers are now in the mid 20s. A far cry from where I started out at over 400!

I hope that by sharing my story, it will help spread awareness and inspire others who are dealing with this condition. There is hope!

Donate in honor of Pam