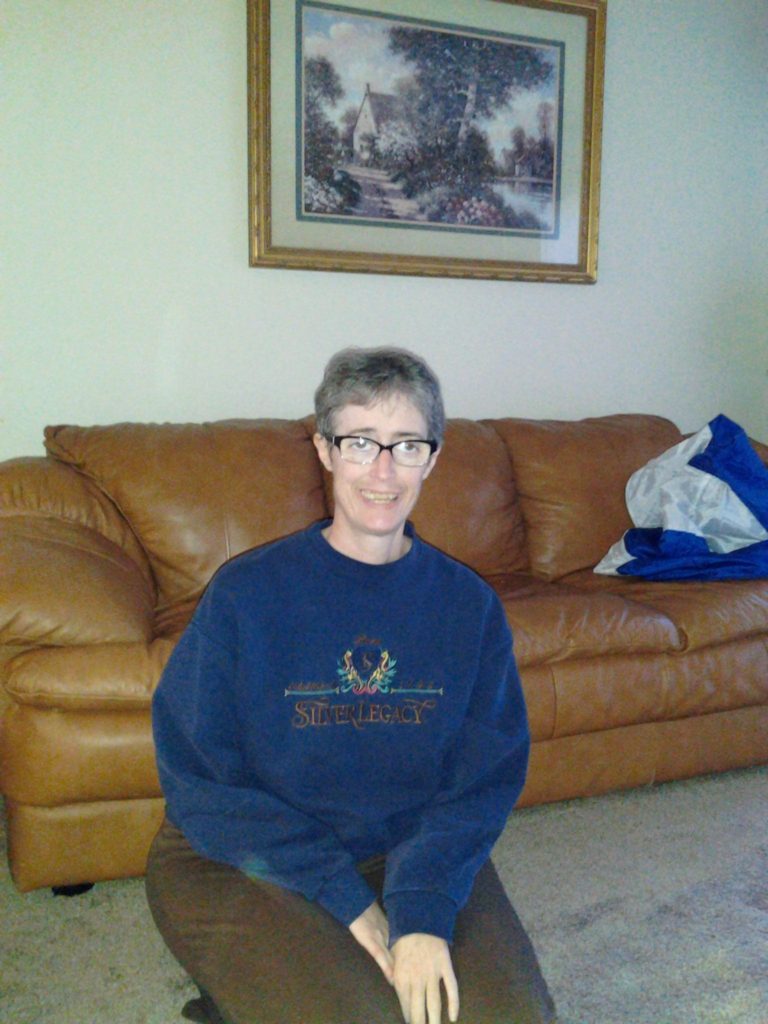 My name is Joanna and I was diagnosed with Homocystinuria at age 3,  (1974) when I rubbed Trisodium Phosphate (paint thinner) into my eyes.  They originally thought it was Marfan's Syndrome but upon looking at my eyes closer they determined it was Homocystinuria.  I was born 10 years after it was discovered in the U.S. and newborn testing was not available at the time.  At age 6, my right lens was removed. The surgery was brand new then and so I still have some floaters in that eye.  My left lens was removed because of a cataract a few years ago, so I don't have a lens in either eye now, but still see perfectly fine.  It is the macula that controls vision, not your lens (which is  why when people get Macular Degeneration, they refer to it as tunnel vision.).  I see normally with my glasses, but without them if you shine a light in my eyes I see a circle with a whole bunch of dots in the center.  I think the darker dots are due to my strokes, but I am not sure about that.

At age 12, I was diagnosed with scoliosis, and they had to do surgery on my upper spine to prevent my lungs from collapsing.  Although the rod only goes to my mid-back, my mother still thinks that my whole back was corrected, because the scar goes all the way down my back.  If it was corrected completely though I would not be able to move my back at all though, and I can feel where it ends.

At about 19 years old, I had a B-12 problem which caused some balance problems and panic attacks.  This is when I was put on Cystadine which helps me to get rid of homocysteine that is trapped in my body.  It has a very bitter taste, so I had a hard time finding something to mix it with and finally decided on lemonade.  I always liked lemons and they don't require sugar for me.   My mother thinks the balance problems and panic attacks was due to a stroke.

I had my first stroke at age 30. I have Grand Mal seizures which trigger strokes, but haven't had one since 2005.  I was 34 at the time of the major stroke which paralyzed my entire left side.  Before the major stroke, I didn't believe what my doctors were saying because nobody took the time to look it up and it is so rare.  It also helped to have the doctor at OHSU question his students on it.  I wasn't taking my medications or following the diet at that time.  I was also under a huge amount of stress because of a job I had just left and another I had just started.

I was told as a child if I followed the diet and took the medications then I would never have  strokes, and I now believe that.   In California they just told me to eat a vegan diet. I didn't have access to the foods that are available now. This is still a touchy subject with my mother, but on a vegan diet even if I go gluten free I haven't been able to keep my levels below 50.  Right now with the medical foods and medications my levels are that of someone who has never had the condition.  My lowest homocysteine level was a 4.  You would also never be able to tell I had a stroke by looking at me.  Thanks to rehab, and what I can remember from CNA classes that my father recommended, everything is now back.

I now work for The State Oregon Homecare Commission as a Homecare Worker/ Personal Support Worker. I work with those over the age of 65, and those who are disabled on Medicare and Medicaid in their home.  I can be trained to do anything that a nurse can do, but most of my employers just want house cleaning and some errands done. They don't realize all that we can do because we are called homecare workers and not caregivers as the title should be.  As a Personal Support worker, I work with people who are mentally ill or addicted to drugs. All are my employers are adults. The youngest person I have worked with is 30.  My work now keeps me busy enough without outside activities, but I used to run a movie group on Facebook and Meetup that does free screenings before they come out in the theaters.  They are still available in many areas globally.