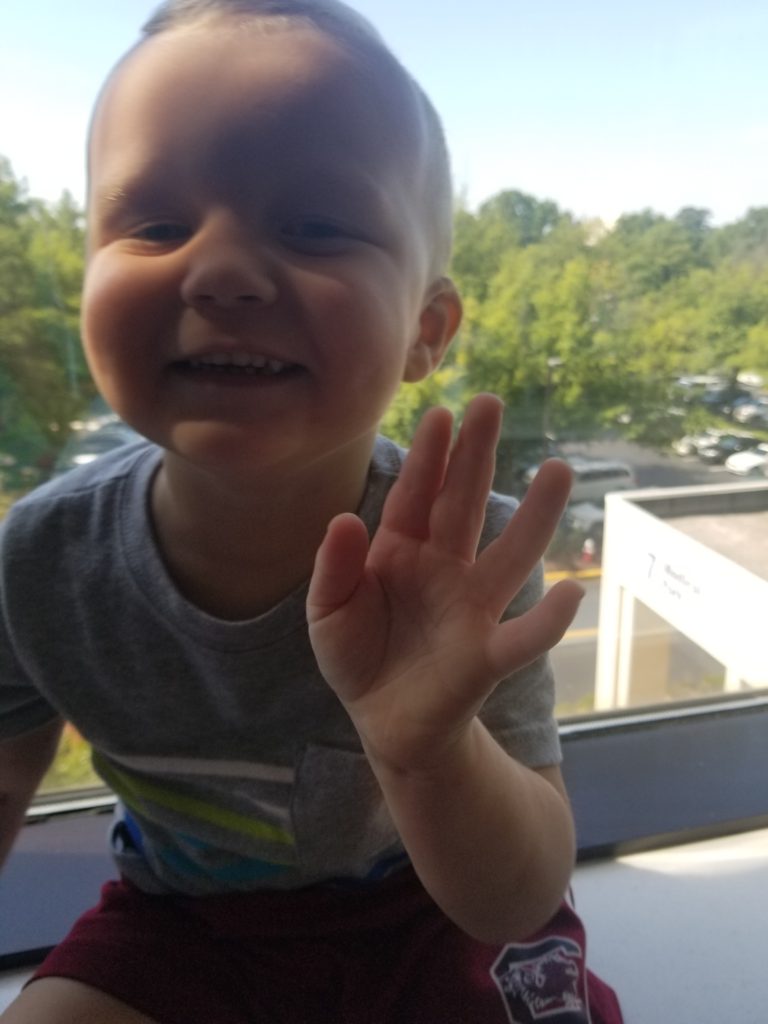 July 10, 2018 was the worst day of my family’s life.  This was the day that our sweet Elliott, 2 years old, was put into a medically induced coma and placed on the ICU Floor of the children’s hospital where he would remain for 29 days.  Elliott was having seizures with no outward signs and doctors could not figure out why.  They would later find out that the seizures were a result of a series of blood clots in the veins throughout the brain, which also resulted in Elliott having a stroke.  I will never forget the words      spoken to us by the doctor on July 15, 2018 – “We want you to know how serious this is.  We don’t expect to lose Elliott to this, but you need to know that we could.”  It would be what seemed like an eternity (but was really just 11 days after Elliott was admitted to the ICU) that doctors were able to pinpoint a cause for everything.  “Homocystinura”, they told us.  It took a doctor looking at  Elliott’s ‘whole picture’ and realizing that his   homocysteine levels were through the roof (250).   This diagnosis was a blessing for us because it meant having an answer.  But, this diagnosis was the beginning of a new lifestyle and a huge learning curve for our  family.

Elliott is now home and doing well! He is on lots of medications and a brand new diet.  We are counting the methionine in his foods and he is allowed to have 126 mg each day.  In addition, his must drink his HCU/Prophree shake daily.

How has the journey with HCU affected our family so far?  Well, mostly it is hard to be spontaneous.  No hopping in the car and going out to eat just yet.  Our lives involve a great deal of planning now.  We have to make sure that anywhere we go, we have Elliott’s medications and either food that has already been weighed or we must bring our scale.  We are also navigating through the uncertainty of feeding a semi-picky

toddler who is very limited by what he can eat.  Since we are counting methionine and that is not something that is readily posted on food and drink packaging, we are ‘playing it safe’ right now by only giving him foods where that information is available.  Our new lives also (at least for right now) involve a lot of worries and unknowns.  We wonder why Elliott’s homocysteine level jumps from week to week.  We worry when he doesn’t feel good or isn’t acting himself – could it be just a normal pain or a common cold? Or is he acting funny because there is something wrong internally that we cannot see?  It can be very scary, especially since this is all so fresh and new to us.

If I could give some advice to a family just starting their journey with Homocystinuria, I would say to first, take a deep breath.   This new diagnosis will come with a lot of changes.  It will be a lot to take in at first.  But, you can do it! And knowledge is power.  Now that you know what you’re dealing with, you can help yourself, your child or your family member to live a healthy life!  It will be a learning curve, but there are plenty of people and resources to help you along the way! For us, it was the Facebook group  “Homocystinuria awareness and support” where we have been able to connect with other families.  Also, the HCU Network America has some great resources and even held their very first conference this year!  Most importantly, you are not alone.