The current therapeutic objective is described in the Guidelines for the diagnosis and management of cystathionine beta-synthase deficiency. Click here to view the Guidelines.

There are several approaches being investigated for the treatment of classical homocystinuria. See our Investigational Therapies Research Map.

Gene therapy is a treatment approach that involves delivering genetic material (DNA) into a person’s cells to compensate for defective genes. The process involves using a vector (e.g. the adenovirus or common cold vector which is inactivated and has no biologic activity) to deliver the genetic material into the body. The cells in the body (in the case of classical HCU, the liver cells) will then transcribe the DNA and produce the CBS enzyme. The CBS enzyme would then be expected to function as normally and restore the biochemical pathway. It is unknown how long the product will last and whether readministration will need to occur over time.

Screening for chaperones based on x-ray crystallography

Research has shown that the administration of a metabolic compound called formate can reduce levels of homocysteine in mice, especially when combined with betaine. This study was supported by a grant from HCU Network America and HCU Network Australia, with additional funding from the William R. Hummel Homocystinuria Research Fund. Additional work is required to determine an appropriate dosage form, but if successfully developed would be expected to be taken on a daily basis with lifelong administration.

A study was conducted using thiol-based reductants in combination with ERT to potentially achieve greater reduction in homocysteine, which was funded by HCU Network America and HCU Network Australia. The thiol-based reductants have been shown to free up homocysteine by breaking down bonds that homocysteine forms and the ERT can then metabolize a greater amount of homocysteine leading to a greater reduction in HCY levels. This approach would need to be formally studied in combination with one of the systemic enzyme therapies described above and would need to be taken on a lifelong basis along with the enzyme therapy.

Taurine is a naturally occurring sulfinic acid that acts to increase tissue levels of the major cellular antioxidant glutathione by exerting a cysteine-sparing effect. In an animal model of HCU, the co-administration of taurine acted to normalize blood-clotting parameters, decrease inflammation in the vasculature, and increased the effectiveness of the betaine response. In a short-term human pilot trial, taurine reversed endothelial dysfunction in human subjects with HCU. Further studies of taurine are being considered. 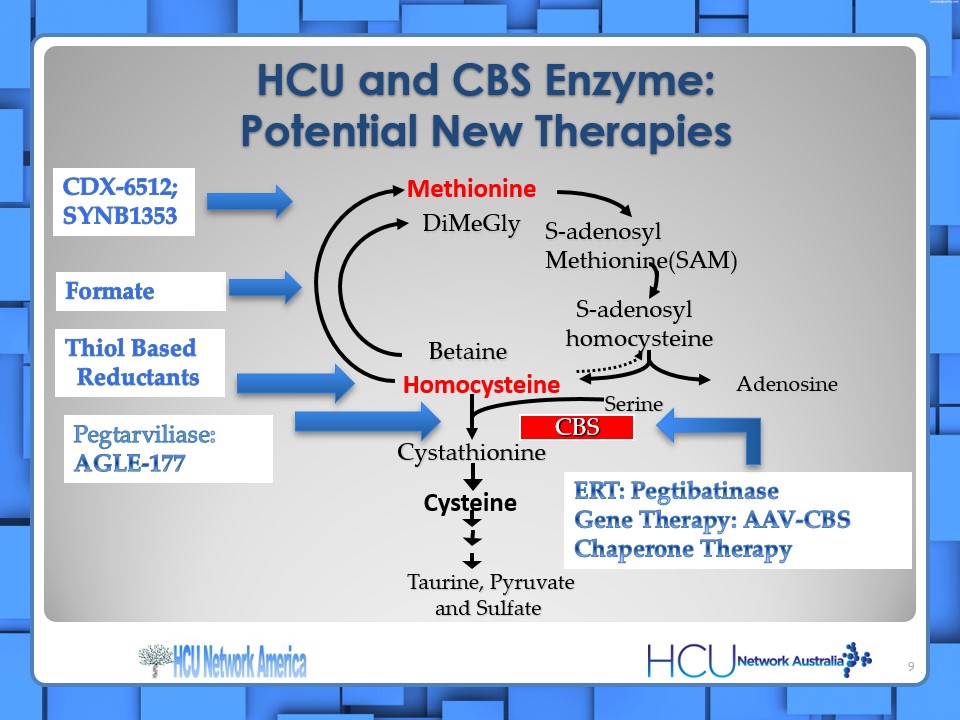