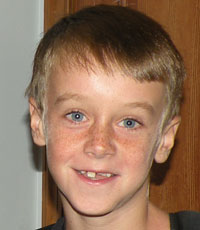 William, the son of Chris and Tara H., was born in Colorado in August, 2005. Like other babies born in the U.S., Will’s heel was pricked to collect a blood sample for newborn screening. However, newborn screening does not test for the same disorders in all states. His parents were offered an extended newborn screen, which tested for an additional 25 diseases, including Homocystinuria (HCU).  Will's parents elected to have the extended screen done and, soon afterward, they were notified that he had tested positive for HCU. Further blood and urine tests confirmed the initial findings and Will was clinically diagnosed with HCU and accepted as a patient at The Children’s Hospital (TCH) in Denver, Colorado.

Through further DNA testing at TCH immediately following Will’s diagnosis, it was determined that he had the most severe form of HCU. This meant Will would require a strict low-protein diet, including specialty medical foods, prescription medication, a metabolic formula, and daily supplements. It was overwhelming to realize Will would face these issues for life, but the good news is that the disorder can be managed and the possibility for symptoms can be reduced with diligence and proper medical care. For this his family feels blessed.

Will has been on the metabolic formula and low protein diet since he was diagnosed at two weeks of age. It’s part of the his family’s routine and it’s part of who he is, but Will does not let his illness affect him as a person. When you meet Will, you quickly realize that he is a typical kid. He runs, jumps, laughs, and learns; he likes Sponge Bob Square Pants, and he genuinely brings joy to those around him. Will’s diet and medication are the major reasons why he is so “normal”. His parents hope this will continue to be the case, but there are no guarantees. It’s going to be a long road for Will and the possibility of symptoms is ever-present.

Will and his family have since moved from Colorado to Central Pennsylvania to be closer to family and their roots. Although Will is now under the care of Dr. Jaya Ganesh at The Children’s Hospital of Philadelphia, they are still connected to TCH in Denver. TCH and its partners and researchers at the University of Colorado Denver are leading the way on HCU research. Additional research funding could lead to advances in treatment which could mean much more freedom for Will and other homocystinurics in the future. Not only freedom in regards to the types of food he may eat, but more importantly freedom from deadly blood clots, freedom from premature strokes, freedom from brittle bones, freedom from dislocated eye lenses, and freedom from developmental delays and mental retardation. This is the future and the freedom for which his family are striving.

Donate in Honor of Will