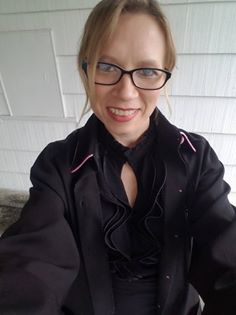 When I was 11 years old I started noticing I was having trouble seeing the chalkboard at school so my dad took me to have my eyes checked. They said I had a slight Astigmatism in both eyes, and I got my first pair of glasses. From then on, my eyesight progressively worsened. When I was about 14 years old, the eye doctor noticed that the lenses in my eyes had started to drop and the little threads that held the lenses in place were disintegrating. No one understood why nor did they recommend further testing. I did not have insurance and my parents were low income so I just lived with my eye issues. Every time I got new glasses the lenses were thicker and thicker.

When I was about 22 I started noticing that when I bent over, something would happen to my eyes and my pupils would get really big. I finally made an appointment with an ophthalmologist and he explained to me my lenses were completely dislocated, and when I bent over the lenses would fall to the front of my eyes, and I needed to have surgery to fix it. I was told it was approximately $20,000 per eye. I had no insurance and no money. At this point, I still was not given an explanation as to why it was happening. So again, I just lived with it.

Fast forward about 10-12 more years. I started getting really sick and the doctors couldn’t figure out why. I was living in Idaho and had several blood tests to try to figure out what was wrong with me. The doctor finally put a generic name on it and said I had an autoimmune disorder. I ended up moving back to my home state of Washington. I needed new glasses so I made an appointment with an optometrist, an amazing man that wanted to help me get surgery even though he didn’t know why my lenses were the way they were. He referred me to the Pacific Cataract and Laser institute.

Before I went to the institute, the optometrist dilated my eyes like any normal eye appointment. I went home and that night I had bent over while giving my daughter a bath and my lenses went in front of my pupils. Normally all I had to do was lay back and cover my eyes and they would go back to normal, but this time they didn’t and I had to go to the Emergency room. They ended up not being able to help me but called the Pacific Cataract institute after hours and they told me to come in first thing in the morning. I was scared out of my mind thinking I was going to go blind. I got there first thing the next morning and they put the dilation serum in my eyes and eventually they went back to normal.

The doctor told me it could be due to one of a few things that were going on with me, and he expected it was homocysteinemia. So he contacted my primary physician to have my homocysteine levels checked. It took about 5 days for the results, but when they came back my levels were 350.

My doctor didn’t know anything about homocysteinemia so she had to do some research. They put me on high dosages of vitamin b12, b6, and folic acid, as well as baby aspirin. Six weeks later they tested my levels again, which came back at 175. It was better than 350, but still not good. Since the levels were coming down they had me continue taking the dosage and I had my levels checked every 6 weeks for 6 months. The lowest it got too was 150, but kept going up and down. My primary physician referred me to a blood specialist because she didn’t know what else to do for me. They ended up increasing my doses and monitoring my levels for the next 6 months with no success of it going lower than 125 but kept yo-yoing.

So they finally referred me to a geneticist. It took about another year, but now my levels are finally starting to come down and stabilize after being put on Cystadane, Foltanx, and a limited protein diet. My last level check was 27 and I just had my 39th birthday in April 2019. Woohoo! I did have my lenses replaced when I was 34.

HCU has greatly affected my life in a negative way. I have had severe headaches and migraines ever since I can remember. I was always coming home from school and work because of the debilitating headaches. I couldn't participate in sports as a result of my eye condition. Since doctors couldn’t figure out what was wrong with me, my children's father thought it was all in my head which strained our relationship to the point of separating.

Some successes I would say was having my eye surgery and restoring my eyesight and finding the right doctors and medications to finally stabilize my homocysteine levels. Words of advice: be an advocate for yourself or family member going through this genetic disorder. Never give up trying to find the right doctors to help along in the journey. Take the necessary medications even though there will be some days you just want to throw in the towel. Oh, and join a support group like this one! It helps knowing you’re not alone and/or crazy. I was officially diagnosed when I was 34 years old in 2014.